TMI Thursday: Yes, It Was That Big.

(This is it folks. It’s Thursday. And I’m baaaaaaaaack! I took a week off last week, and I’ve gained some followers in that time. So let me warn you here. These are the days where you close the browser on your computer, shake your head a little bit, and say, “What the HELL was I doing reading everything he posted?” That’s right… It’s TMI Thursday, brought to you by a blogging associate of mine named LiLu. If you want more of this garbage trash wonderfulness, click that little button of the old people having more fun than you did last night. That, my friends, is real.)

I’ve always been a weird pooper.

Sometimes, when I was younger…wait. That can be next weeks.

Anyway, I never had a real schedule for dropping the kids off at the pool until I got older. About 24 or so. Used to be, I’d forget about taking the Browns to the Super Bowl. Wouldn’t even cross my mind. And since I eat a diet rich in cheese and meats and fats and bad things, sometimes, I get the constipation, and it this instance, it was a very bad thing.

Occasionally, I’d go a couple days without chunkin a deuce, and I’d start getting scared. Because I knew it was gonna be big, and I knew it was gonna hurt. I’d eventually go into the bathroom and give it the ol college try, because I knew it would be better than waiting on my body to say, “Hey man, we gotta do this. We’re backed up worse than the plumbing at the Biggest Loser ranch.” You know, the poop where you roll your sleeves a little bit, because it might get ugly.

Well, one day, I realized that I’d gone about 4 days since my last poop. I realized this whilst Kid Funk and I were at a restaurant called Las Fuentes here in my town. We were just about to sit down to a fine Mexican meal, and my body gave me the tap. Not the rumbles tap, or the assplosion tap. But the “Hey man. We want this food as much as you, but something has to go.” So I got up, and I went to the restroom. I dropped trou, and I sat down for a minute or two.

The reason I wasn’t down longer is because folks, I FELT how big this thing was. It lowered itself down to be released, and I knew without a shadow of a doubt that this wasn’t the sort of thing that could be handled in a small restaurant bathroom. I looked around, and they didn’t even have a plunger. This WAS going to require a plunger. So I rescinded the order, pulled up my pants, and went out there and ate like a condemned man eats his last meal. Slowly.

We got home, and I went into the restroom to duke this battle out. I now had 4 days, and a Mexican lunch on top. I buckled down, and this is essentially what happened. Folks, I know I exaggerate a lot on this blog, but this is the honest to God truth the best approximation of what came out of me. 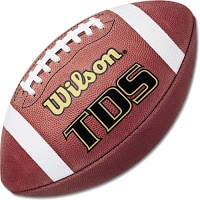 That is a Wilson TDS 14 and under regulation football. The closest thing I could find. The dimensions of said football? 10 inches by 6 inches. 6 INCHES AROUND. Guys and gals, it was the worst 30 minutes of my life.

I hollered at Kid Funk before I flushed it, just so I could have a witness. This legend has not grown with time, and I swear on it all that it was every bit of that big. He took one look at it, and he said, “How did you not make any noise when that was coming out?” I was defeated. Utterly defeated. I had nothing left. This thing started my hemorrhoids.

I asked Kid Funk to be the first to comment, so that you would all know that I wasn’t lying about it. I also asked him for a quote. The quote:

That really sums it all up. Oh yeah, I mentioned flushing it. I had to use the stick end of the plunger to break it up into flushable pieces. The time for the whole thing to be completed from the birth to the subsequent abortion? One hour.