Final Proof That Michael Phelps Cheated In The Olympics… 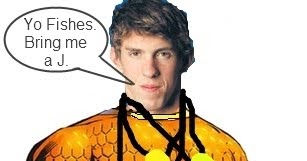 I sat down to watch the Olympics last night, and Michael Phelps was doing an interview about how truly awesome his awesomeness truly is.

Sometime during the interview, I started asking myself some questions. Just wondering if he was really who he says he is…

Then a Subway commercial came on, and that sealed it. In the commercial, he swam through a corn field, some pavement, and concrete. That’s when I knew.

Michael Phelps has been cheating in the Olympics.

No, it’s not drugs. It’s not doping. It’s not some super human adrenaline based ball shrinking steroid. It’s not even the fact that he listens to puppies being murdered on his iPod before every race.

It’s this photo I dug up after the interview. 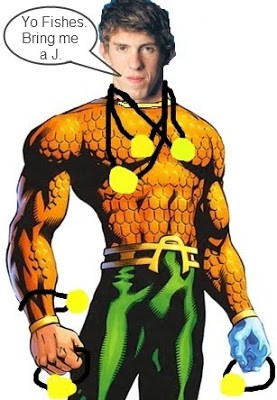 Michael Phelps is Aquaman.
Oh, believe me. I gasped in astonishment too.
How come we didn’t see this sooner?
Because the cheating bastard grows a beard the second he gets out of the water. It’s like Clark Kent’s glasses. Who knew?
Some of you may be having trouble believing this, so I’m going to quote some facts.
1.) Aquaman’s name is Arthur Curry. If you make an anagram out of that, you wind up with arc hurry rut. You know what, I honestly forgot where I was going with this.
2.) Look at the body types. Nuff said.
3.) I’m pretty sure I saw people misting him down during the interview. Matter of fact, the boy always looks wet. This ties in with Aquaman’s inability to be out of water for more than an hour. I say someone needs to trap him in a building somewhere. If he starts getting twitchy at 45 minutes, we’ll know the truth. Just don’t actually KEEP him from getting water. Have you ever seen a pissed off blue whale? It wouldn’t be worth it.
4.) Look at the picture. He’s clearly talking to a fish. Aquaman talks to fish.
5.) Aquaman fought the Nazis. Michael Phelps is Jewish.
6.) Phelps swam through CONCRETE. Have you ever tried that? Try it. Right now. I’ll wait. Back? Yeah, I bet you’re pretty skinned up, too. Aquaman could swim through concrete with a swimming start. Thank you Subway for the clincher.
So there you have it, folks. Final, stone cold proof that Michael Phelps is Aquaman.*
As a superhero, I really don’t think he should be allowed in the Olympics, and here’s why: First off, if you let one join, everyone is going to want to join. The next thing you know, we’re having to send men up into space to verify that Superman DID in fact land on Pluto in the long jump, and that shit takes time. I mean, you’re looking at the 2012 Olympics lasting about 65 years. And that’s no good. Second, you’d have a mass uproar about why these douchebags haven’t actually been helping anyone out, finding Osama Bin Laden, stopping terrorism, etc. And lastly, I’m pretty sure Usain Bolt is the Flash. Proof there? Ummm…his last name is BOLT. Also, he won the hundred yard dash with his arms out like wind sails, turning around and telling everyone at the starting line to not even take off. So yeah. It makes other athletes feel bad. And we don’t want anyone feeling bad at the Olympics. Hell, that’s why we have curling…
…The Canadians have to have SOMETHING to win…

*All information used in the above post may or may not be completely false, except that he listens to puppies being murdered, therefore I base this claim on absolutely nothing.