Memoir Monday: High School Travis Gets His Kiss On.

Some of you may be shocked to hear this, but I was not really a popular guy in high school. If you had to class me, I’d probably have landed squarely in the middle, as so demonstrated by this senior class picture. 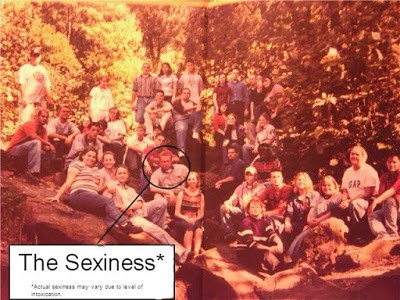 What’s that ladies? A close up? Well hell yeah I can do a close up. 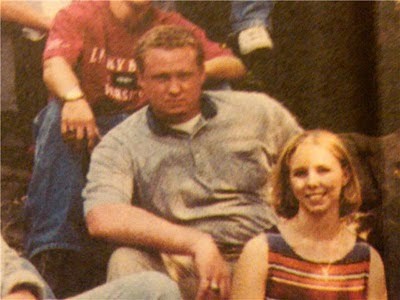 Ring on, arm on the knee, gut sucked in, that’s the pose. Don’t hate. I was way cooler than you, and I dated your wife. She totally made out with me.
However, while I didn’t fit in any one clique, I was pretty much friends with everyone. I could wander from group to group, having something to say to everyone, and making every person laugh.
I was also a basketball player. 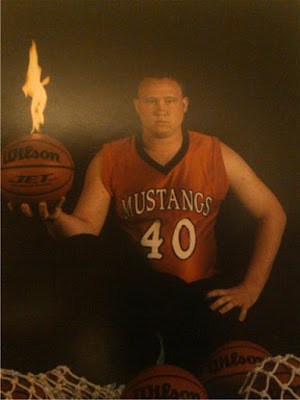 Flaming balls. Yeah. I was WAY cooler than you.
I was legit, son. I scored almost a thousand points in two seasons, and I was MVP my junior and senior year. I could take pictures of all my various accolades and achievements, but trust me; the blog doesn’t have room.
“The greatest thing about me is my humility.” -Will Smith. (& Travis Sloat)
All basketball players have to practice. At least the good ones do. If you’re Kentucky, you can play ball on sheer talent without working hard, but you see where that gets you, under 50% from the free throw line and a humiliating bus ride back to NBA draft after West Virginia makes shooting 3 pointers look as easy as dunking on a kid goal.
Anysuck, back to my practicing.
It was a light practice day, and I had decided to try my luck behind the 3 point line before the bell rang. I only made three or four from behind the arc during my illustrious high school career, and those were pretty much all luck.
In walked Kara. Kara was a breathtaking young thing that I had a typing class with. The typing class I took that had nothing but freshman girls in it. The typing class that was the best class I ever took.
So Kara walks into the gym, and on a whim I shout out, “Hey! If I make this, can I get a kiss on the cheek?”
“Oh Travis, you’re so funny… Yeah…”
I shanked it. She walked off, and I tried again the next day. I kept trying until I made it. Then I got my kiss on the cheek, and it was glorious. This of course made me shoot the long ball with wild abandon anytime she was in the gym.
One day I got brave. I asked her for our usual deal, then I insisted that she wait until I made it. I made the shot, and she moved in for the kiss.
As she did, I quickly turned my head so that my lips were facing hers dead on.
As she pressed her lips to mine, time stopped. It was a magical moment. I was kissing Kara, the cutest freshman there was. I’m pretty sure a rainbow sprouted up, and no telling what else sprouted as well. Butterflies flew by. A light breeze came up…
SMACK!
The rainbow went away, and so did any other condition caused by the glorious moment. Turns out the light breeze was stirred up by her hand heading towards my face. My ear was ringing and the whole side of my face was numb. She slapped me so hard I actually think I went blind in one eye for a few minutes. Out of the two times I was slapped in high school, it was definitely the worst.
Was it worth it?
Hell yes it was worth it. That was the single greatest three point shot I ever hit.
P.S. I saw you in Mazzio’s the other day, and it made me think of this story. If you ever read this, I just want to say that I’ll never apologize for it. I hope it was as good for you as it was for me!
Other Non-Slapped 3 Point Shots At Life This Week: (GO READ THEM!)
Joey’s Memoir Monday: My Writing Peaked In The 5th Grade.

Shany’s Memoir Monday: How To Scare The Living Sh*t Out Of Your Mother.

Angel’s Memoir Monday: About My Daddy.

Erin’s Memoir Monday: Even Stay At Home Moms do Karaoke.