Well, if you missed it, you should probably be kicking yourself pretty hard right now.
Go on. I’ll wait. 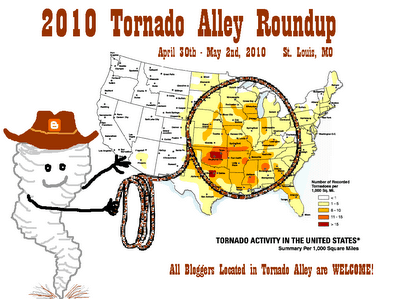 IT WAS AWESOME! TAR 2010 went off without any major hitches, and Daffy, Coffeypot, Jeff, Ed, Bambi, Barb, Kid Funk, The Missus and I all had a blast!
P.S. You can click on most of those names for links to blogs.
The Missus, Kid Funk and I literally skidded into Missouri via hydroplaning early Friday afternoon, and then we had all kinds of adventures with retarded Missouri semi truck drivers. I swear, if it wasn’t for the fact that my little Japanese built car wouldn’t be crushed beneath them, therefore ending our lives, I would have gone head to head with some of them. We also outran tornadoes and huge storms the whole way up, but we made it to The Lou relatively unscathed. The weather took the “Tornado Alley Roundup” moniker a bit too seriously.
We checked in, met everyone but Daffy and Jeff, who would arrive later, and then the fun began. By fun, I mean free drinks in the hotel lobby. Folks, I’m not kidding when I say this; I am the fattest lightweight you’ll ever meet. I was 3 drinks in and feeling pretty good, and we all ran across the street to go to the Hard Rock, where I had never been.
What followed was proof positive why I should never drink, and I am absolutely sure there will be pictures to go along. I wound up dancing the YMCA in front of the entire restaurant with a lesbian who kept wanting to lead, and we may or may not have had a dance off. Since I have two moves, the Moneymaker and the Bunny-Hop, she won quite soundly. I got a free drink mixer in the shape of a guitar, so I’m calling that a win. Between all of us gentlemen, I’m also fairly sure that there wasn’t a waitress in the place that didn’t get sexually harassed.
When we left, it was raining, and so it was quite the little run back over to the hotel, which sobered us up, so we had to drink more beers in the hotel bar. Daffy showed up, Bambi and Barb left us for good to go to some wedding that we couldn’t crash, and then everyone pretty much went to bed. Kid Funk spent about 30 drunken minutes trying to “set the auto feature” on the coffee machine in the room, which turned out not only to be broken, but also to have never featured an auto option. The Missus and I slept in a single full size bed, and I have to tell you, since the Tyra show, when we last did that, we’re about 70 pounds lighter, and so it was a lot easier, but still wicked lame.
Day two brought us round to the free hotel breakfast, a swim in the pool for myself and The Funk, some hot tubbin, and then we all gathered up to figure out the events for the day, which turned out to be the worst planning job in the history of time. We went out to the Arch, and you have my word, it is still standing. One of the security guards was a Duke fan, so he was cool. This was also where we met up with Jeff, and I even waved to him while he was stuck on a bridge. Speaking of Duke, Ed was a very good sport about having to hold up his end of the bet and wear a Duke hat all weekend. 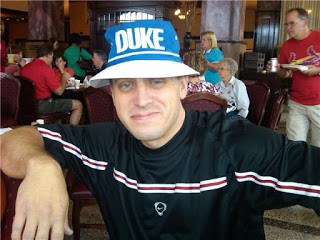 After the Arch, pretty much all plans fell apart, and we went to the mall thing they had there at Union Station. That was a blast, mostly because Coffeypot told penis jokes during lunch, and Daffy told lame jokes about vaginas being licked while she colored. We have video of that, but there is also video of me dancing, so I won’t draw till you do, guys. 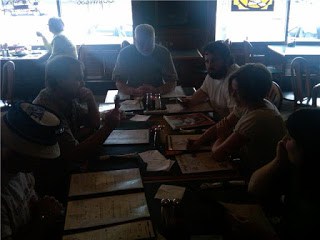 From there we decided to go our separate ways for a bit, get refreshed for some bar hopping in the evening. Jeff and I decided to go down to the pool, where we chilled in the hot tub for a bit before meeting the ENTIRE CAST of Jersey Shore. I shit you not, and These folks were dead ringers, and they were every bit as stupid. They were there from Arkansas for a bachelor party, I really don’t think I have to say more, but here is a picture to clear it up. 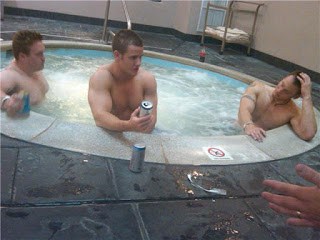 Then we got drunk. Jeff, The Missus, Kid Funk and myself all had a little drinking time in our room, and there was Jager, 151, beers, and more Jager. That was NOT including the gin and tonics I had, the margaritas The Missus had, and the beers we all had for the free drinking time in the lobby. Shit got real, folks. 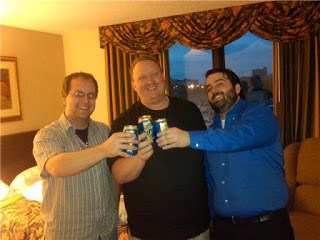 We got downstairs to meet up with everyone, and it was there that we discovered a drunk Cards fan passed out in a chair in the middle of the lobby. I got called an asshole by the desk clerk, but I managed to get a picture, and then later I got a video as they put him on a luggage cart to take him back to the room. That will follow later. 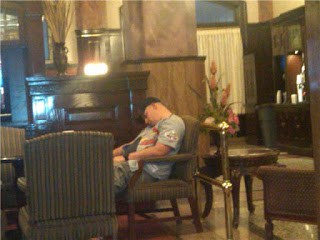 I’ll be real honest when I tell you I don’t remember a lot about the evening. I remember that Coffeypot drove us around, I remember winding up seeing a Lamborghini in the parking lot of the Four Seasons hotel and casino I was in briefly, and I remember sitting out in the street having the best damn bruschetta and the worst damn calamari I’ve ever had in my life, watching about 34 brides to be go by enjoying bachelorette parties. From there, I know we left, and I know I got back to the room, and I know I woke up the next morning.Of course, this can only be confirmed because I am typing this up now. 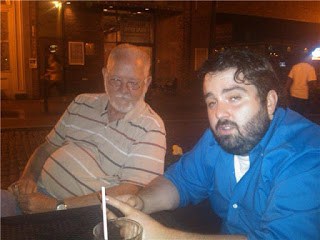 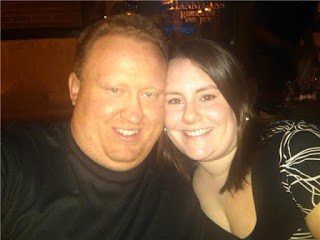 Me and The Missus
These are just a few of the pictures, but I will post more later this week. I made all of the TAR folks promise to put up a Memoir Monday today, so be sure to check back often for updates today! This was definitely the most fun I’ve had in a LONG time, and I definitely can’t wait for a sequel, which I hope you’ll all join! 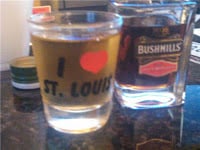