Riding In Trucks With Girls.

Sometimes an event happens that inspires a blog. Sometimes it’s a collection of events, and you never know when inspiration will rise, kicking and clawing its way to the surface of your mind, demanding attention, wanting to be released. In that instance, you have choices. You can choose to stifle the inspiration, and eventually it will consume your thoughts, hindering your creativity, and rendering your writing useless. This blog has been a long time coming. ***
It doesn’t happen often, and certainly not often enough, and perhaps that is what makes it special. Maybe if it happened everyday I wouldn’t appreciate it for what it was, just a dad and his daughter, riding somewhere together.

***
Watching you get in. That’s my favorite part.
My truck sits high off the ground, and you have to almost jump to get in. I’m not always a perfect gentleman, I have to confess. I don’t always open the door for you like I should, to teach you that when you’re older, you have to fall in love with a boy who does that. I just like watching you as you clamber clumsily into the cab. You aren’t very graceful, but I think one day you will be. 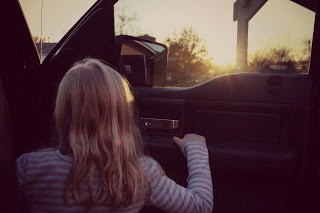 You get buckled up, I get buckled up, and we take off. You’re smiling. It never takes long, and the question always comes.
“Dad, can you turn on the music?”
I do. I always do.
You always sing along. It doesn’t matter if you know the words or not. You still sing. I will give you an example, using Taylor Swift’s “Mine” as an example.
You don’t really know the words, not all of them, and so it sounds something like this:
“You were in college hmm hmm ahhh haaa mmmhmmm,Left a hmm mmm ahh haahmm ahhh.”
But then the chorus comes, and suddenly, you’re on a stage, you’re in your element, and your voice rises with the power of the knowledge of the words.
“DO YOU REMEMBER WE WERE SITTING THERE BY THE WATER!YOU PUT YOUR ARM AROUND ME, FOR THE FIRST TIME!”
I have another confession, daughter.
Sometimes I put on songs I know you’ll sing to.
My mind, in its ceaseless recollection of trivial information and recurring moments, flashes back to something very important in my life.
I sat at home the night before making the drive to pick you and your brother up. I was trying to think of ways to introduce you to our great big family before you actually met them, and I decided to make a picture slideshow on my iPad for you both to watch.
I placed pictures in order and captioned them, and then I set it all to the music of “Guinevere,” by the Eli Young Band.
On the way home from Watonga, you watched that video a hundred times. At some point, you figured out the words to the song, and you belted them out ceaselessly. Then you serenaded us with Christina Perri’s “Jar of Hearts,” which was the only other song I had on the iPad.
You were gorgeous. You were amazing. And you still are.
Listening to you sing, that’s my favorite part.
Inevitably, your interest in singing wanes, and you start talking to me. Sometimes the craziest things come out of your mouth. Last night, for example, you counted Christmas trees. Then you started spotting cars that looked like your mom’s.
Sometimes we talk about stuff as normal as how your day was, and then there are times such as the other night when you wanted me to explain to you what nihilism was. After telling you my best guess of a definition, you responded promptly.
“Well, I believe in Jesus.”
I know you do, darling. And nothing makes me happier.
You always ask for gum. For the last six months, I’ve kept a pack in my truck just for you and your brother.
You smack your gum. Loud.
Which brings us yet to another confession, dear daughter. If anyone else in my truck smacked their gum as loudly as you, I would pry open their jaws, rip the gum from their mouth, and toss it out the window. But you, you’re different. I guess it’s cute…for now.
Talking to you, that’s my favorite part.
You want to hear something crazy?
My truck has a sensor in the passenger seat that measures weight, and turns the airbag off automatically when someone doesn’t weigh enough. A little light in the center of the console indicates when the sensor has been triggered and the airbag is off.
When we first got you and your brother, that light was always on.
“Passenger Airbag Off”
Now? Now that little light flickers when you sit in the seat. Sometimes it’s on, sometimes it’s off. It’s not broken.
You’re getting bigger. You see, that light is an indicator in more ways than one. You’re older, bigger, smarter.
But it also tells me something else.
One day, you’ll stop riding in my truck. Instead, you’ll get a car of your own, and maybe you’ll start riding in trucks with other boys. It is just as inevitable as you singing, and just as inevitable as all of our wonderful trips together have to come to end when we get to our destination.
You unbuckle and slide out of the truck awkwardly, hanging on to the door handle for dear life. Your feet land on the ground, and your little blond head disappears into the house.
Watching you get out, that’s the worst part.
To end this, I think I’ll borrow another line from Miss Swift, one that happens to be in the same song as previously mentioned, and a line that I have definitely memorized.
“You are the best thing, that’s ever been mine.” 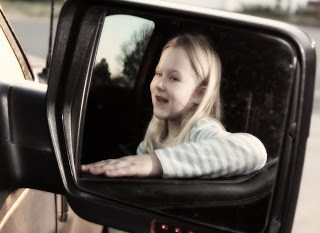