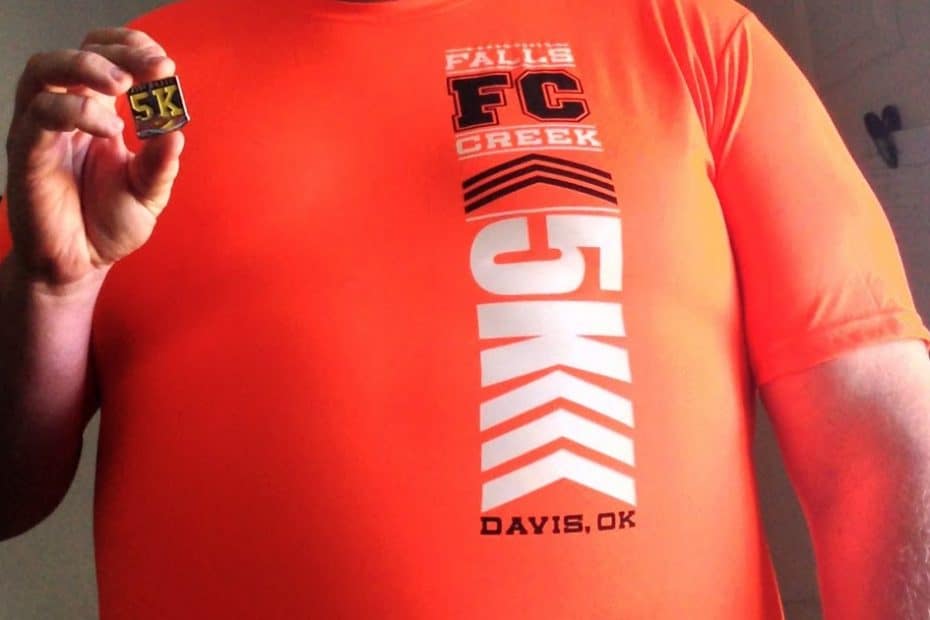 So I ran a 5K for the first time in my life while at Falls Creek this year. I keep saying “ran” because that’s what I hear other people saying and I figure I should probably just say the same thing and not mention that I walked 4.85K of it.
My time? A confident 55.24. I got a pin and shirt, which was a XXL, and didn’t even come close to fitting. I walked into the gift shop with my pin and the kid behind the counter just stared at me. I said, “Y’all got any triple beefies behind that counter?” And she replied, “Seriously?” I think she honestly thought I had stolen the pin.

I want to make one thing very clear though. I DID NOT FINISH LAST. I would also like to make another thing clear. People skinnier than me finished behind me. Clearly this means I’m the most in-shape fat guy in the entire world.
I’ve taken the liberty of breaking down the “run” into segments that most popped out to me.
***
The Walk to the Race – I seriously probably walked 3K to get to the 5K and then another 3K back. They have all these little golf carts running around and not a single one would pick me up and give me a ride. When I got to the “race”, I asked the ladies at the starting line if 5Ks worked on a deduction system whereby I could subtract the walk to and from my cabin from my actual Ks ran, and they said no. I’m probably going to write a strongly worded letter.
Self-Image – I think the biggest mistake I made outside of waking up that morning was actually looking at the other runners before the “race” started. Pretty sure all fat people can attest to this, when we go anywhere we immediately check to see if we’re the fattest person there. It’s like the old Lewis Black bit about IHOP. Anyway, I got down to the start line and I was the fattest person there by at least 150 pounds. People stared at me and asked if I was some sort of official. It was real awkward. All these people stretching and getting ready and I was just bent over trying to get my wind back from the walk down, which could explain the poor start I got.
Golf Cart Chasers – At one point during the “race” I saw a golf cart hurtling towards us at a ridiculous rate of speed. In my mind, I thought, “Well that’s just unsafe, we have folks running (walking) here.” Clearly there had been a breakdown in communication and the situation would be resolved shortly. However, as it passed, I noticed two gentlemen behind the cart, keeping pace with it. It was almost as if the cart was slowing them down. I think at this point we were fifteen minutes into the race, and these dudes were on the home stretch. They’d literally lapped us twice. Just making everyone look bad for their own personal glory. Keep it classy, boys.

Hills – SO MANY HILLS I’M GOING TO DIE LORD JESUS TAKE ME HOME. Essentially, and I’ve worked the math on this, if I had just laid down and rolled down the hills, I would have taken 10 minutes off my time. Solid math fact. Just a follow-up question, is there a committee or activist group I can join that propositions all-flat racing courses? Does Westboro have an opinion on this? If so can I get an application? I’ll pay dues.

Shin Splints – I’m not gonna lie. I’m just shy of what scientists call “peak performance ready.” I got the shin splints about 38 seconds into the “race.” For those of you who don’t know, a shin splint is where your entire shin muscle separates from your entire shin bone,* and drops down onto the ground, where you drag them behind you through mud and rocks and get them filthy. The burning sensation this causes is, in purely clinical terms, the equivalent to child birth, and is directly connected to your motivation to finish the “race.”

Red Rovers – These are the people who line up side by side, jammed tighter than me in a SMART car, and take up the entire width of the road, just walking leisurely and discussing things such as New Balance tennis shoes, wind resistance, and what they’d like to have for dinner at the 4:30 Early Bird. I’m not trying to imply they’re all old, but I’m also not denying it either. My favorite way to get through them is to scream “RIGHT!” and blast through two of them like I’m Emmitt Smith breaking through a defensive line, only with more hip dysplasia.**
Camera Crews/People I Know – Here’s the thing. I like to look good on camera, and in front of people I know. I could care less about people who don’t know me, they can think what they want. In the words of Tupac, only God can judge me, you know? But when we passed anyone with a video camera, I had to start jogging. I also started jogging any time I saw someone I knew or when we passed our cabin, just dragging my shin muscles pitifully behind me. It got real sad a few times towards the end.
The Finish Line – You can walk the whole “race” but if you don’t run across the finish line you’re a stone cold loser. I’m almost positive John Wooden said that. A direct quote. My legs were numb at that point, so running was more guesswork than painful, but I did it anyway. I went through the finish line like there was a crowd cheering and a ribbon for me to bust through when in reality it was six bored camp staff waiting to hand me a pin so they could go eat breakfast. I also may have left my partner behind at this point but it’s every man for himself here am I right?

“Oh I Ran It Last Year” People – I think we’re all familiar with these guys. “Oh, you ran the 5K this year? I ran it last year/I ran one just last week.” Guess what though? You didn’t run this one, so your time of 10.34, which I’m pretty sure is impossible anyway, has no bearing here. It’s like when Martin Luther King Jr. said “The only race people care about is the one you just ran…and white people.”*** I don’t want to hear about your last 5K when I’m clearly trying to get my shinabolic reconnected to my dorsimus tissues.

*Got this fact directly from WebMD. **Can humans get this? I know German Shepherds can, so I figured we could too. ***100% legit MLK quote. Just can’t find a source for it.