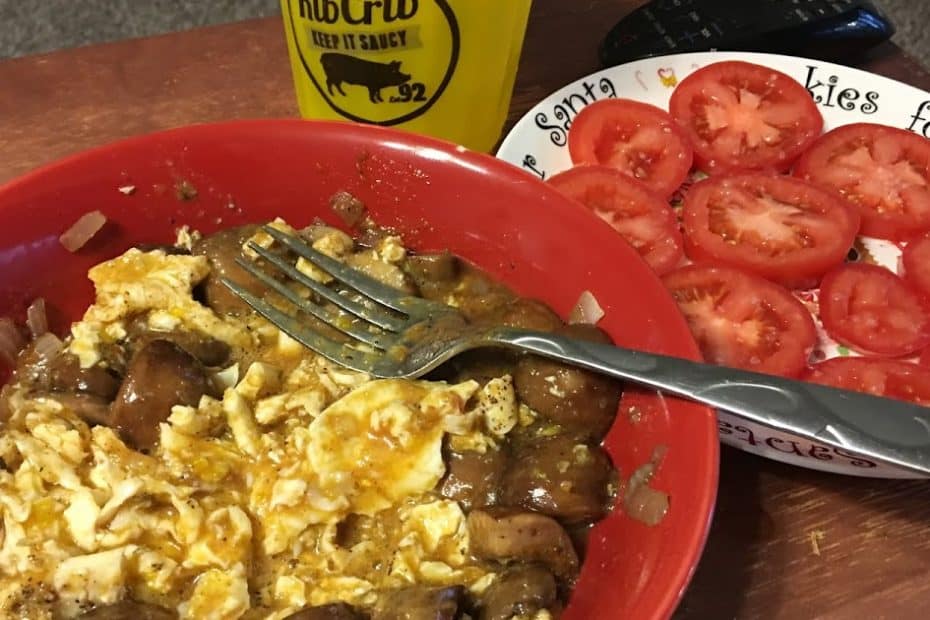 Lack of preparedness, Alicia being sick, and intense cravings/mood swings almost put me over the wall. But, here I sit, Day Four, having gotten through Day Three without caving.

Breakfast was the only meal I got a picture of because it was seriously the only meal worth photographing. I sautéed mushrooms and onions, then added GUESS WHAT?!?!?! Three fried eggs. That’s right, more eggs.

I did apply my homemade hot sauce liberally, and truth be told, it was a great breakfast. 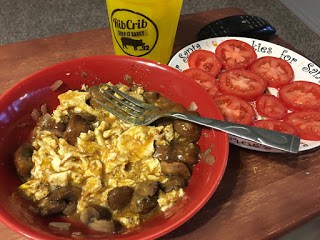 I also sliced up some tomatoes and sprinkled some pink salt on them. They were store-bought so they weren’t great, but they added a nice contrast to the eggs.
Lunch was leftover lettuce tacos from the night before. Ugh. I just sort of powered through it. Lunch will be tough for me as long as I continue to eat leftovers, and I’ll continue to eat leftovers because it’s really difficult to get up and fix breakfast AND lunch. Maybe I should try this meal prep thing.
As an aside, I did make it through the mid-morning without a snack. However, I broke into my almonds at about 2 p.m. I have my seventh graders that hour, and we’re working on research projects, and I could feel myself getting a little cranky.
I got home and ate five pickles. Five. They were tiny pickles, but I ate five, and drank pickle juice because that’s allowed and don’t judge me. I also ate an apple.
Dinner was a shitshow. Alicia had set out turkey and ground beef, and then got to feeling puny, and I was pissy because, no carbs, and so I had to think of something. My plan? Turkey burger patties with sautéed onions, garlic, and mushroom powder, then I made a sauce out of drippings, chicken stock, and almond milk. I also sautéed onions, mushrooms, zucchini, and asparagus for a side. My patties were undercooked, so that sucked, but three minutes in the microwave fixed it.
Alicia also brought home some raw almonds, and I tried my hand at roasting them. I popped them in a 350 degree oven for 15 minutes, let them cool, then added a teaspoon of light evoo, salt, onion and garlic powder, and cayenne. I wound up eating them all as a bedtime snack.
As previously mentioned, today is Day Four, and we’ll see how it goes. Hopefully supper will be a shade better this evening, and I’m really going to try to stay away from all the “snacks” that I’m indulging in, even though they’re compliant, and even though Erica is telling me it’s okay.