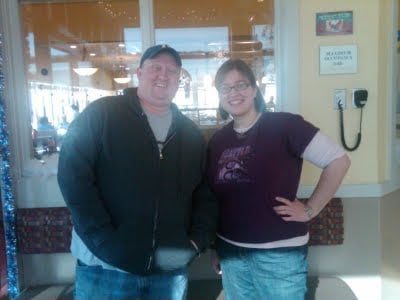 So I created this little slice of heaven. Few of you probably remember my original layout. It was really gay. I won this new thing in a contest, one of many things I’ve won.

Let’s review a couple of things that have happened in that year.

1. My very first blog follower was Statgirl, although Jeff over at Bad Monsters joined real quickly.
2. My blog started attracting Google searchers when I wrote a post about Birthday Sex
3. Tamara from Cheapskate Mom found me when she Googled that song for a post, then I won her caption contest, further increasing my follower count.
4. I got pissed when I couldn’t get over 50 followers and vowed to you that I wouldn’t be concerned with it anymore. I lied. I now have 258. I want more, dammit. Tell your friends. Now. Seriously. Do it.
5. I’ve had 5 jobs in the last year…you’ve heard about them all.
6. I started Memoir Monday in August of last year, and I’ve slacked on it here lately. It will come back, I promise.
7. I learned that racism in Kentucky doesn’t get you near as many comments as a good poop story.
8. I joined the ranks of TMI hosted by LiLu, and further increased my traffic.
9. Kid Funk got a blog…then neglected it like my last 4 fish.
10. I FINALLY got Shine and Johnny Virgil to comment on a post. Still waiting for Diesel.
11. I’ve shown you all more than once that I still have daddy issues.
12. I introduced you to The Missus
13. I’ve won about $200 worth of stuff over the past year.
14. I tried to write a novel in a month
15. I encountered the great diet epic fail of ’10
16. My popularity peaked at 56 comments…on a poop story
17. I told the entire blog community I have a small penis, prompting Shine to have a weird conversation with a co-worker
18. I WOUND UP ON THE TYRA BANKS SHOW. Thanks once again to Tamara at Cheapskate Mom.
19. I tried out for The Biggest Loser…and failed…
20. …but I really won, because when I started blogging one year ago today, I weighed in at 370 pounds. This Sunday when I weigh in, the scale is going to say under 300, and I’m throwing a party. You’re invited.
21. I participated in a real life blog get together called TAR in St. Louis.

Over the last year I have made friends and lost friends, both real and virtual, and it has been one hell of a ride. I’d like to say this would go on forever, but unfortunately that’s not possible. I have chosen the one year anniversary of my blog to tell you that I’m shutting this place down.

Naw. I’m just yankin ya. I gots shit going on right now, folks. That’s why I’m so slow on posting. But right now, we’re trying to get The Missus pregnant, we both have new jobs, we’re both losing weight, we’re trying to exercise, and really, the blogging world has me pretty jaded right now. I’ll be back though, and in the meantime I’m trying to pump just enough posts into this thing to keep it afloat. I did the same thing to your mother that one time we were stranded at sea.

Seriously though, I love you all, and this has been one hell of a ride. I look forward to what the next year brings, and it damn well better bring me smaller titties.

That’s what she said.

This is a conversation with The Missus that I had the other day on IM.

TM: I’m back.
Me: Yay! The Youngest and I are trying to jailbreak my Ipod.
TM: What does that even mean?
Me: I am still not sure, but it’s cool!
TM: Okay, I mean, I understand doing that to an IPhone so it will work on other networks, but just the Ipod?
Me: This is different. It gets you in the setup and what not.
TM: What do you need in the setup for?
Me: It’s a long story, but I’ll get free music!
TM: How?
Me: I’m not real sure. The Youngest says so though, and that’s good enough for me.
TM: Yeah, and listening to The Youngest is a sure fire way to get things done.
Me: The Youngest is tellin me about almost getting caught by a cop, doing it with a girl at Honor Heights.
TM: Dang it, I thought The Youngest was still a good kid.
Me: Naw.
TM: That kinda hurts my heart.
Me: HA!
TM: So how does it feel to be the only brother to graduate high school with his V card?
Me: Cheap shot!

KF: Sin is sin!
Me: Right. I know that. Hell, I also know that if I ask forgiveness, He’ll forget about it. That’s wicked cool. Jesus is a pretty cool guy.
KF: Yeah, but He talks in red.
Me: I would too, iffen people had nailed me to a tree for just tryna make the world cooler and get em into Heaven.
KF: Jews…
Me: Right? I have like 95 Jew followers.
KF: Who are you, Blog Moses?
Me: I might be. Someone made a Moses reference the other day. I need a staff.
KF: A really strong one.
Me: I need to learn how to talk majestically too. In a way that gets me millions of followers with lame ass attitudes that aren’t ever happy.
KF: Now you sound like Blog Obama.
Me: Hey, I’m trailblazin.

Also, the other day I met Lauren, from over at (Mis)Adventures In Theatre! She was on a road trip from Montana to North by God Carolina, and she happened to drive through my neck of the woods! We had a wonderful visit in an IHOP, because I’m classy like that.

She is a great person, a great blogger, and she was even more fun to hang out with! It just really makes me want to go on a “Blog Tour” and meet all or most of my bloggy buds. Maybe one day.

Below is a picture!

Hope y’all enjoyed this little Saturday post, and I’ll see you back tomorrow maybe for a “Most Embarrassing Songs On My Ipod” type thing. Maybe. Enjoy your weekend!