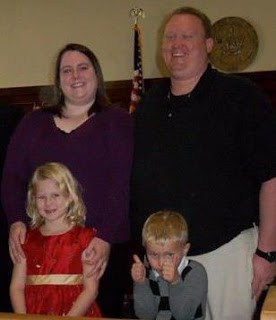 As I’ve mentioned previously, one day our children will find this blog. Someone will tell them about it, they’ll meander their way around the Internet, and voila, they’ll have more information about their dad than they’ll ever want.

Another aspect of that would be the fact that one day our children will have a Facebook account. And when they do, they’ll want to look back at the story of their lives I’ve told with pictures and with status updates. Kids being kids, I’m sure they’ll want to count how many times each have been mentioned or shown, and that’s when our son will realize something…

I’ve often joked that if I want to improve my Klout score, all I have to do is post something to do with our darling daughter, and the response is overwhelming…not to mention the impact on the above mentioned Klout score.

And so this blog goes out to you, son. One day you’ll see it, and hopefully this will make up for all the Internet attention your sister got.

***
This all started on Saturday.
I’ve been really busy with work and school, and what little time I’ve been able to spend with y’all has not been as precious to me as it should be. You changed that this weekend.
I woke up early and headed out to cover a story for the paper. I didn’t have time for breakfast, and rushed through the interviews and the article because I had an appointment at the Apple store for my computer battery.
I didn’t have time for lunch before we went, so as we walked into the store, I started feeling the first effects of having taken diabetes medication without food. I got a little cranky. You rushed up to me and asked if you could go play on the iPads in the kid’s section. I said okay, and your sister went too.
After a couple of minutes, I noticed a little girl standing beside your sister watching. I asked her to get up and share with you so the kid could have a turn. When she sat down next to you, she immediately started trying to touch the screen of “your” iPad, and you shoved her arm away a little too roughly. I told you that you were done, and you had to come over to the wall and put your nose in a corner.
I know you don’t remember this specific incident, but I’m sure you’ll remember the discipline you’ve gone through growing up, and I’m sure, depending on how old you are, you think it’s so terrible. You want to know a secret? I think it’s terrible too. You and I share many qualities, remarkably so, given your lack of my genes, but the one thing we don’t share is an ornery childhood. I was mostly calm and introverted, and you are the complete opposite. I grew out of my esoteric behavior. I truly hope you never grow out of your outgoing and carefree nature.
We headed to CiCi’s Pizza, and as we were getting out of the car you did something that upset me. Right now, less than 48 hours later, I can’t even recall what it was. This tells me that it wasn’t really “me” that was upset, it was “Hungry Dad,” who is a monster. I’m still learning how to be a dad, son. I don’t know it all, and I’m sorry for that.
So I snapped at you.
You replied with a “Yes sir,” and we started walking to the restaurant.
Without even thinking, you reached up and grabbed my hand. I know you had no idea what that could do to me, and I don’t know that I can explain it.
You weren’t even mad that I had just gotten on to you. You knew that I wasn’t going to let anything happen to you crossing the parking lot, and you just trusted me – and loved me – enough to get you into the restaurant.
We ate, and I felt better. In fact, I felt so much better that I gave you and your sister each a dollar to go play games with. You went straight to a claw machine that promised you could “play till you won.” You played twice, looked up at me, and said, “Dad, can you win me something?”
Then you ran off.
Son it took me 15 more tries to win you that candy. Your mom laughed at me. But I wouldn’t quit.
When we left the restaurant, we had to take your mom to Hobby Lobby. We were walking in, and you did something I thought was hilarious. You parked yourself under a tree that was half as tall as me, and sat there in the “shade.”

As we resumed our trip inside, you looked up at me and said, “Dad, your favorite superhero is Superman, right?”

I said, “Yes.”
You just nodded your head like you knew all along, and then we went on in. While we were in the store, you pointed at something and said, “Dad, it’s your favorite color flower!”
I looked where you were pointing, and I saw a gigantic orange flower on display.
I’ve been saying for a year now that you don’t listen. Apparently I have been terribly, terribly wrong.
I smiled and said, “Yes it is,” and we went out to “cool off the car” while your mom and sister checked out.
Later that evening you wanted to go with me to a basketball game. You have no idea how badly I wanted to take you, but since I was the referee, I couldn’t keep an eye on you…and since you wouldn’t sit still for longer than 30 seconds, that’s kind of important. So, you didn’t get to go.
When I got home later that night, I was standing in the kitchen and you walked in.
“Dad, I got your favorite color juice tonight!” you exclaimed as you held up a bottle that once held an orange sugary beverage that was not at all similar to juice.
You know my favorite superhero is Superman.
You know my favorite color.
You even know my favorite basketball team.

I think you like Spiderman a little better than Superman, and I think you’re partial to pink instead of orange.

And let me tell you a little secret.
I LOVED the color pink until about the sixth grade.
God, in His infinite wisdom and screwy sense of humor, put you and I together for a reason. Then, knowing we’d need women in our lives to keep us from killing each other, He went ahead and gave us your mom and sister too.
One day I’m going to figure this “dad” thing out.
I’ve got you eating like me already…

It’s not always sunshine and pleasant thoughts. You are stubborn, prone to violent outbursts towards your schoolmates, a bit of a liar (albeit a terrible one), and did I mention that you’re stubborn?

However, every phone call we get, every bad report from a Sunday School teacher, and every talk from anyone telling us you’re in trouble all ends the same way.
“He has a heart of gold. He is so thoughtful and sweet…when he wants to be.”
We still have work to do. About a year ago, after one of your fits, your mother and I looked at each other and cried, each wondering if we could ever straighten you out. I looked at her and said, “If God didn’t want this to happen, it wouldn’t have happened. It’s going to be okay.”
Guess what. It’s all okay. In fact, after this weekend, it’s better than okay. It’s amazing.
In honor of this post, I changed my Facebook profile picture to the one below. This is one of the happiest moments of our time together for me. We told everyone that you caught this fish. In reality, your mom set the hook and reeled it in while you ran to tell me about the fish you were “catching.”
She gave you all the credit. That’s how your mom is. That’s why we love her.
You were ecstatic. You ran. You yelled. I barely got you to stand still for the picture.
That’s how you are.
That’s why we love you.

P.S. If you count the “likes” you got for this picture the first time I posted it, AND the “likes” it’s gotten since I made it my profile picture, the total comes in at a whopping 90. That’s not bad…
…but it’s not even half the “likes” your sister got on the picture of me baptizing her.
But don’t worry. It’s not like it’s a contest.
P.P.S. If your sister is still getting “Internet attention” when you read this, let me know. I’ll shut whatever she has down and give you $100. That’s a promise.