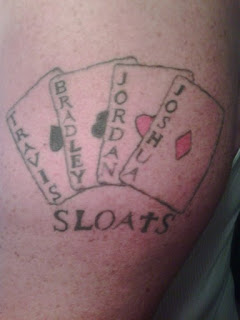 I am a tattoo fan.

I like looking at pictures of interesting tattoos, I like getting tattoos, and I like coming up with complex tattoos that have a deeper meaning than they display.

I have only three though, the most recent being my kids’ names on my calf that I got on Sunday.

I have a philosophy behind tattoos that I think might anger a few people, but here goes:

I’m not going to put anything on my body that I wouldn’t be able to stand before the Lord and at least try to defend. That’s been my rule of thumb for all three tattoos, and I’ve had imaginary conversations with Jesus before getting each of them.

“Okay Jesus, this one is of each of my brothers, and I know it’s got cards, but it’s a play on words see, four of a kind, Sloats. That’s it, it’s family, I think You think family is pretty important, not more important than You, but still pretty important, so I just want You to know that that’s why I got this thing.”

“Travis, shut up for a second.”

“Have you accepted my gift of salvation?”

Now let’s move past this digression and get on to the show, which is my tattoos and their meaning.

This is the tattoo I was referencing in my hypothetical conversation with the Lord. It’s a riff on the four of a kind hand in poker, and since there are four Sloat brothers, we thought it would work, and I think it does. Here’s the thing though. We came up with this tattoo while we were in Florida in 2008. Three of us were old enough to get tattoos, and we had Brad come up with the drawing. He did really well I think.
But here’s the kicker (heh). All of us swore we would get the tattoo. “Yeah Travis, we’ll get it. Let’s all get it, it’ll be awesome.” Josh was like fourteen at the time, and he was pressuring mom to sign for him to get it, like that could even happen, but we were in Florida and just assumed U.S. Law was no good there.
So we get back to Oklahoma, and I got mine done. I think it looks good. I love what it stands for.
But.
Do me a favor the next time you see one of my brothers and ask them to show you this tattoo. Just do it. Just ask.
Douchebags.

This tattoo really has a special meaning for me.
It’s of a painting called “Forgiven” by Thomas Blackshear II. The painting depicts Christ holding a man who is holding a hammer and a nail, which is obviously a representation of man putting Christ on the cross.
Underneath, I added the words, “The Beauty of Grace is that it Makes Life not Fair.” These are lyrics from Relient K, in their song “Be My Escape.”
I love that quote, and there is a story behind the image as well. You see, I first saw that painting in Mardell’s in Tulsa. I walked in to the store, was browsing through something or other, and I saw this painting. To date, it is the only work of art to make me cry upon first sight. I broke down. What it represents is powerful.
I’ve screwed up a lot. More than I care to admit. More than I will admit. And that image, to me as a Christian, is the allegorical equivalent of driving the nails into my Savior. And to see that He loves me enough to hold me as I do that…it’s incredible.

Like I mentioned above, I got my third tattoo this past Sunday at Black Gold in Tulsa. I’d like to say this, out of all my tattoos, this one hurt the most. I’m almost positive there’s a metaphor there, as in my children hurt me the most because they’re at ages where they make me want to scream. But it seriously felt like Caleb was sawing my leg off. He kept saying things like, “Just breathe, we’ll get through this…”
My initial idea was to have my children draw the tattoo. Then Aven handed me a drawing of four playing cards with the kids’ names on them, and I knew I was asking them to do too much. Keeli wanted me to get “Okay Mustangs” and Jeremiah 29:11. That’s a heck of a combination.
So after a bit of deliberation, I decided to create my own design and get their names in it. Then I thought, “What the heck, let’s just get their names in their own handwriting.” Well, as you can see, with Aven and Akeeli that was fine. Drake on the other hand, well I guess he writes in Hebrew.
You can’t tell in the picture, but I also asked them what color of ink they wanted it done in. Aven picked black, Keeli was blue, and Drake said purple. Surrounding their names is the scripture reference Jeremiah 29:11, which was my dad’s favorite bible verse and says this: “For I know the plans I have for you, says the Lord. Plans to prosper you and not to harm you, plans to give you a future and a hope.”
I love that verse. I love that my children are obviously part of God’s dynamic plan for my life. I struggle daily to keep my cool with them, and to treat them the way that they need to be treated. I get angry more often than not, I think because I hold them to too high a standard. I need to work on that.
However, I love them. They are a permanent part of my life now. And if the Lord asks me to defend any of my tattoos, I think I’ll have an argument. Not that I’ll argue with the Lord. I wouldn’t dare.
Love you guys. 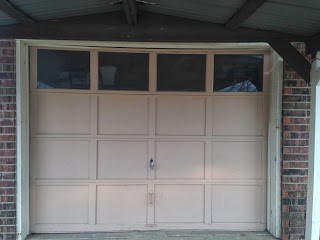 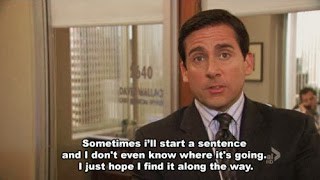 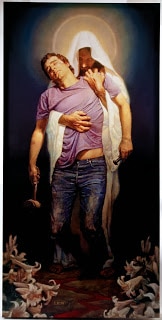 Hello all,
Sorry I’ve been a posting dud here lately. I’ve just been very busy! I got a new tattoo today. A bit of a back story on it. I saw the painting in a Christian bookstore a few years back and the second I saw it, I started crying. I don’t preach much on here, because it’s not what this is for. But to me this painting summed up what I think is Gods entire collection of feelings for us. The painting is called “Forgiven.” That being said, here’s the pic! 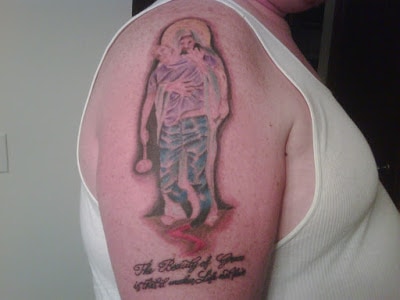 The words underneath read: The Beauty of Grace is that it makes life not fair.
I love it!
I’m going fishing tomorrow with a 16 year old foreign exchange student from Brazil. We’ve been once and nothing exciting happened. Hopefully tomorrow will be the day!