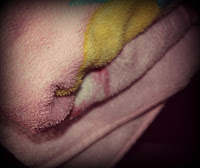 The blanket was pink and purple, and looked like it might feature the face of a Disney character. It was impossible to tell, however, because it was wadded up and stuffed in the bottom of an animal carrier. Sitting atop the blanket was a very nervous cat, hunched against the back wall, completely silent, the smells of the office too unfamiliar and intimidating.

To the man observing, it looked like a blanket his seven year old daughter might have stored somewhere, the kind that are a dime a dozen during the holiday season or at a specialty store. It was a bit dirty, but it seemed well-intentioned and well-used.

The man slowly lifted his eyes to the individual carrying the crate. She had arrived in a cab, which was still a little rare in this city. She was around thirty years old, plainly dressed, and appeared to be every bit as nervous as the cat huddling on the blanket.

Our observationist was just there to pick up his dog, who had been the recipient of a very humiliating surgery the day before. The reader is surely familiar with this surgery, and will pity the dog accordingly. The man was waiting patiently to be helped, and was next in line when the young woman with the blanket walked in the door.

She didn’t express any regard for the rules of society when she walked around the man and struck up a conversation with the still busy assistant, but after hearing her speak it was plain to see why. Her voice carried an indicator of a mental handicap of some sorts, unknown to the author, but placing the taxi and her assumed rudeness into immediate context. Forgiveness, tinged with a pity he struggled to tamp down, rose in his heart.

The assistant asked her if she’d fed the cat in the last twelve hours, and the young woman responded with a firm no. Then, a moment after, she leaned forward and confidentially informed the lady trying to take the crate that the cat had a “few pieces” of food that morning.

She was reluctant to let go of the crate. But as she let her hand fall away, she looked at the assistant and said, “Will you please put his blanket with him after he’s done to make him feel better?”

The man—who is notorious for having a tender heart, especially in the vet’s office—steeled himself, for he felt the tears coming. Hot pin pricks of empathy stung the corners of his eyes, and he knew he couldn’t break down. Not here again. Not now.

And then a memory was triggered.

He’d had a recent experience with blankets. A terrible experience. He had hated a pair of blankets not long ago, and the memory of them was chiseled into his mind, bored into his subconscious, and caused him to obsess over the objects of security (and terrible things) for an unhealthy amount of time. He had repeatedly wanted to burn that pair of blankets, and burn the things they represented out of the lives of the people he loved the most.

Of course it was never really about the blankets, was it?

Then the young woman asked another question.

“How much will it cost?”

The assistant told her, and then told her it would cost extra if she left him there additional nights to heal. The young lady frowned, agreed, and headed out to the taxi, still waiting in the parking lot.

***
There are times in our lives where the basic good will scream at us to do something. If one is not careful, they can over sensationalize it, call it the hand of God or whatever other religious sense they choose. They can say they heard a voice, a prompt, a calling…whatever suits their affiliation. And I would not argue long with those people, because I know God sometimes uses a person, disregarding their spiritual insignificance, to minister to those in need.

But sometimes it has to be humanity. Not pity, not false philanthropy, and not an overblown ego.

Just humanity. Wanting to be good to someone else.

***
God/humanity/the basic good called to the man. Still fighting back tears, he walked out to his car. He retrieved his wallet and brought it back inside. The assistant brought his dog around, who was happy to see the man, but a restrained sort of happy, and understandably so.

“Sir, you’ve already paid. You don’t owe anything else. Just keep him still for a few days.”

“Ma’am, if you knew this dog, you’d know that’s going to be almost impossible…”

Then his voice cracked and betrayed him.

I have a lot of faith in humanity.

I’m pretty sure I’ve told you all this before, but I’d like to reiterate that I believe in the basic good in every person. I also believe that if you put your faith in that basic good into action, then you will be rewarded more than you will be disappointed.

As a believer in that basic good, I try to contribute to it whenever I can. I like to say nice things about people when I can (notwithstanding a few errant diatribes, i.e. some of these blogs), I hold doors for people, and I just generally try to be what I expect people to be to me.

This past week, I’ve had a couple of experiences with people being exceptionally polite or nice to me. I am certain that no one will ever recognize them for it, so I’m choosing to do it now, as well as tell a story linked to a Facebook status I posted earlier this week.

I went to a grocery store in Warner, Oklahoma a couple of nights ago, and as I was leaving with my items, a mom and her little boy walked in the door I was preparing to exit. My hands were full, and the mom looked at me and walked by, not taking a second glance. The little boy was about ten, and he quickly followed his mother, then looked up and saw me. He immediately turned around, went back to the door, and opened it for me. I was blown away. I looked at him, bent down a little bit to get on his level, and said, “Thank you very much sir, that was very kind.”

I have hope for future generations because of that kid.

Yesterday, I took The Missus out for our weekly lunch date. I’m either at school or working pretty much the whole week through now, so we don’t see each other very often. We went to Miss Addie’s Pub in Muskogee, sat down, and had a very nice meal. We talked and laughed, and I made a huge effort to ignore my phone for the hour we had together. I also had a gin and tonic. Don’t judge me.

I paid the bill, then we left. I dropped her off at work, and then went to get my truck washed. As I pulled up to the machine that takes the money, I looked at my wallet and realized I’d left my debit card at the Pub. I called them, and they told me that yes, I’d left it, and yes they had it sitting in the cash register, ready for me to pick up any time I wanted to. To some people, that might seem like a normal expectation, and maybe it should be. But I feel like they should be recognized for it, simply because it was an act of honesty and integrity that would otherwise pass unnoticed, and therefore unappreciated, by all.

My thanks to you, employees of Miss Addie’s.

And now, the greatest thing to happen to me this week.

I walked into a convenience store on Monday morning to get some refreshments before class. I grabbed a bottle of water and got in line to check out. As I was waiting, I got a little rumbly in the ol’ tumbly. You know what I’m talking about. Not the “sweet Moses I have to find a bathroom now or it’s gonna get real” kind of rumble, but the “Hey, you know what sounds good? Chips and beef jerky,” kind of rumble. Being somewhat on a diet (read: taking a prescription diet pill) I decided against chips and beef jerky and stepped out of line to grab a Special K bar.

Assuming I had given up my place in line, I went to get behind the young lady who was standing behind me just moments before. As I did, she looked at me and motioned me back in front of her, saying, “Go ahead.” I said, “You sure?” and she nodded yes. I thanked her, and turned to complete my transaction. Before I did, I looked at the items she held in her hand and did a quick tabulation of about how much they cost. Since I am terrible at math, I calculated what I think was a can of pop and candy bar to come out to around five dollars. Don’t judge me.

As I got my change back, I got an idea. I handed the cashier a five dollar bill and said, “Go ahead and use that to pay for her stuff.” The cashier just looked at me and started blinking repeatedly, like maybe she needed to blink in order to process information correctly. Eventually she arrived at understanding, then smiled. I walked towards the door, and as I opened it, the young lady behind me said, “Thank you, you didn’t have to do that.”

I’d like to set aside this paragraph for explaining that sometimes I can get a bit full of myself. I don’t mean to, but if I do something nice, I like to think I’m the greatest philanthropist of all time, and I know that’s wrong. Don’t judge me.

Full of my philanthropic benevolence, I turned smartly on my heel and pointed at her to deliver my final line, sort of a “say it and ride into the night and never look back” kind of line, one that was full of meaning, and designed to instantly let this young lady and the cashier know that I was not only a good person, but well-spoken as well. I wanted it to look as though my words were divinely inspired on High by the Lord Himself, and carried from lips by flaming angels.

“No ma’am, thank YOU. It’s nice to know there aren’t douchebags in the world.”

Full of pride and impressed at my rich vocabulary and use of syntax, I executed a perfect about face and promptly fell over a pyramid shaped cigarette ashtray.

As I struggled valiantly to pick up both the ashtray and my pride, I comforted myself with the knowledge that I would never have to see either of them again. I left the store, and continued on my way to biology, full of life lessons and with a funny Facebook status to share with you all.

But what I didn’t tell you…

…is that she walked into Biology class right behind me.